↓ Skip to Main Content
Home › Mobility › What Time is It?

What Time is It? 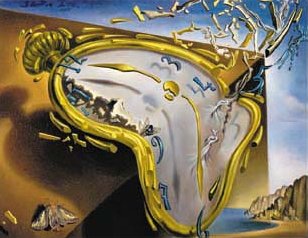 Why, in this day and age, when they can send a man to the Moon, is it so frickin’ difficult to tell what time it is? Specifically, what makes it so seemingly difficult for mobile devices, which are connected to a public network, to tell what time it is? Surely mobile connected devices should be our most trusted time sources. The network they’re connected to is constantly pumping out a time-sync. So what is the problem? Three examples:

I normally carry around a couple of devices. Most recently, these have been consistently unreliable sources of the time. The Blackberry has two time-sync options: network and “blackberry.” Neither of them ever yield a correct time (as measured by my Mac, whose time-sync works flawlessly when measured against the BBC).

The N73 also has a “network sync” option which sometimes works and sometimes doesn’t. I have often found that the time is wildly off – by as much as a few hours. It also doesn’t help matters that a change of this setting requires a reboot.

I have to manually set the time zone on the Blackberry but the Nokia N73 somehow can figure that out for itself.

I just came out of the other end of the Channel Tunnel and my iPhone hasn’t picked up the fact that I’m now in Central European Time – so it’s still showing an hour behind.

In this fast-paced world, it’s more important than ever for your device to know the correct time. This becomes especially important when you’re sharing media (as, for example, a number of people are contributing camera-phone images into a photo pool which you then want to be able to view sequentially). I constantly find myself on conference calls with multiple people in different time zones and knowing the correct time can be extremely important in such situations (and don’t even get me started about how most software just does not know how to deal with meeting planning that happens across multiple time zones or meetings that are being scheduled in a time zone other than your own – the software on Blackberry is a rare exception – I often find myself using the Blackberry to schedule a meeting even when the PC is right in front of me). So what’s going on here and how do we fix it? I’m open to suggestions.

This site uses Akismet to reduce spam. Learn how your comment data is processed.

I'm an immigrant and US/UK dual national who has been living in London since 1999. I'm an advocate for emerging web technologies, the open web, open source and open data. I am co-chair of the W3C Technical Architecture Group. I was a founder and co-organizer of the Over the Air hack day series and of Mobile Monday London. I'm a former .com CTO. I'm currently working at Snyk.

For more info on my professional life, see my Linkedin profile.

I am Tooting on Mastodon and Tweeting on Twitter.

If you're curious where the nickname Torgo came from, I appropriated it from a character in the the movie Manos: the Hands of Fate via Mystery Science Theater 3000.

If you are so inclined, you may find my public key on Keybase.io.

Unless otherwise noted, this blog consists of my own personal views and is not endorsed by my employer or any other party or nation state.

This work by Daniel Appelquist is licensed under a Creative Commons Attribution-NonCommercial-ShareAlike 4.0 International License.